Back to main page
Alexandria youth 'protecting library from looters' 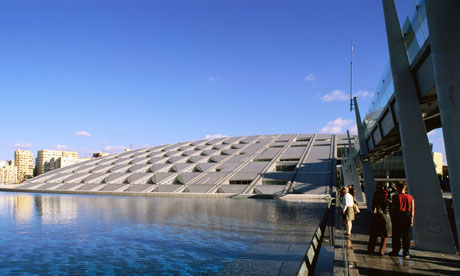 The director of the Bibliotheca Alexandrina has announced that his building, built in commemoration of the famous ancient library destroyed in antiquity, is being kept safe by Egypt's young people during the current unrest sweeping the country.

In a statement on the library's site, Ismail Serageldin tells "friends around the world" that the library is being protected by the city's youth from the threat of looting by the "lawless bands of thugs, and maybe agents provocateurs" who have materialised since the popular protests sweeping through Egypt's major cities began several days ago.

"The young people organised themselves into groups that directed traffic, protected neighborhoods and guarded public buildings of value such as the Egyptian Museum and the Library of Alexandria," he states. "They are collaborating with the army. This makeshift arrangement is in place until full public order returns."

The library is to stay closed while the political uncertainty continues and a curfew remains in place, but Serageldin is sanguine for its security. "The library is safe thanks to Egypt's youth, whether they be the staff of the library or the representatives of the demonstrators, who are joining us in guarding the building from potential vandals and looters," he promises.

Makeshift militias are being formed across Egypt to prevent looters from targeting ordinary neighbourhoods amid reports on Egyptian state television of looters breaking in to Cairo's Egyptian museum.

Founded by Alexander the Great in the 4th century BC, Alexandria was formerly the Egyptian capital and remains its second largest city. The new Bibliotheca Alexandrina, which has shelf space for 8m books, was opened in 2002 after a long campaign to recreate the lost library of ancient times. President Hosni Mubarak, against whose regime protesters are demonstrating, was a leading supporter of the project.

The ancient Library of Alexandria, established under the Ptolemaic dynasty, was the largest of the ancient world but was burned down by Julius Caesar in 48 BC, with its successor building also destroyed, in the fourth century.

posted a new blog entry Elevating the Self: A Book on Values.
34 months ago