Back to main page
No "easy-peasy" novel 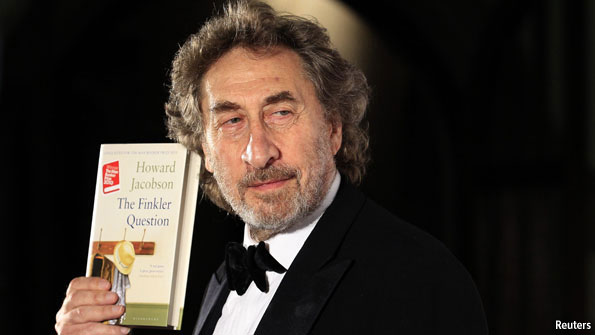 NOW that he has won the Man Booker prize (truly against all odds), Howard Jacobson can finally shake off the distinction of being "underrated". The trophy is for "The Finkler Question", his 11th novel and also the first "unashamedly comic" one to win the prize in its 42-year history. Though humorous, the book needn't be classified as "relentlessly middle-brow, or easy-peasy", clarified Sir Andrew Motion, the chairman of this Man Booker judges. Rather, it "is much cleverer and more complicated and about much more difficult things than it immediately lets you know. Several people have used the word wise, and that's a good word."

Perhaps this prize will help to promote the fundamental seriousness of the good comic novel, much like last year's Booker helped to burnish the appeal of historical fiction. This is something Mr Jacobson is evidently hoping for. Writing in the Guardian over the weekend, he lamented "a fear of comedy in the novel today—when did you last see the word 'funny' on the jacket of a serious novel?" He continued:

we have created a false division between laughter and thought, between comedy and seriousness, between the exhilaration that the great novels offer when they are at their funniest, and whatever else it is we now think we want from literature.

Because comedy is a useful tool of subversion, any dichotomy "between laughter and thought" is ridiculous, he argues (a touch long-windedly). Punchlines allow authors (or anyone, really) to comment on mores or ideas without posturing. Laughter is more seductive than a lecture. Some people call it good medicine.

Maybe this is why good, funny novels are still being written by folks such as Sam Lipsyte (whose latest novel is hilarious), Joshua Ferris (though perhaps not his latest) and Gary Shteyngart (who is very funny, if a bit uneven). The comic novel hasn't quite fallen by the wayside, though the Booker's official stamp won't hurt.

Along these lines, Mr Jacobson unfortunately sets up a false division of his own when he describes the complaints of readers in "the world of blogs and tweets", who whine about hard words or hard work. "Anyone would think that the whole art and pleasure of reading consisted in getting helter-skelter through a novel, unscathed, unchallenged, and without encountering anyone but oneself. Once we wrestled with the angel when we read; now we ask only to slumber in his arms." Oh dear. Is his defense of the comic novel really a thinly veiled pronouncement of the novel's decline? Frankly, I'm amazed: given that the novel has ostensibly been on life support for decades, how is it that so many people keep writing and buying and reading them? Mr Jacobson is best when asserting the merits of a smart comic novel. He needn't taint his case by complaining that readers are now a bunch of lazy, tweeting bums in search of a simple "good read". (Who looks to tweets for mature critical commentary anyway?)

But these are mere quibbles on what is otherwise a day of celebration. Aged 68, Mr Jacobson also has the distinction of being the oldest winner since William Golding bagged the Booker in 1980 at 69. (Tom McCarthy, the considerably younger shoo-in for the prize, will no doubt have his day before too long.) Indeed, the author has waited some time for official recognition. “I’m speechless,” he told the audience. “Fortunately, I prepared one earlier. It’s dated 1983. That’s how long the wait’s been.”

As for the £50,000 prize money, Mr Jacobson announced he plans to spend it on a handbag for his wife."All of it," asked a reporter at the post-prize press conference. "Have you seen the price of handbags these days?" he replied.