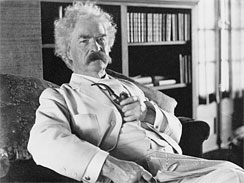 (CBS)  Mark Twain defined a classic as "a book which people praise and don't read." And for years, the "Adventures of Huckleberry Finn" has fit that category, removed from school reading lists across the country for the use of the "n" word.

Publishers Weekly reports that Twain Scholar Alan Gribben has partnered with NewSouth Books to release a version of "Huckleberry Finn" that replaces the "n" word with "slave." It also removes the word "injun."

The idea of a politically-correct version came to Gribben, 69, when he would give public readings of the work and would sub in the word "slave." The slur appears in the book 219 times.

"This is not an effort to render Tom Sawyer and Huckleberry Finn colorblind," Gribben told Publishers Weekly. "Race matters in these books. It's a matter of how you express that in the 21st century."

Gibben is the head of the English department at Auburn University in Montgomery, Ala., and said he knows the version will create controversy.

"I'm hoping that people will welcome this new option, but I suspect that textual purists will be horrified," he told Publisher's Weekly.