As country debates whether to destroy everything connected to former dictator, Shia-led regime remains sensitive about relics 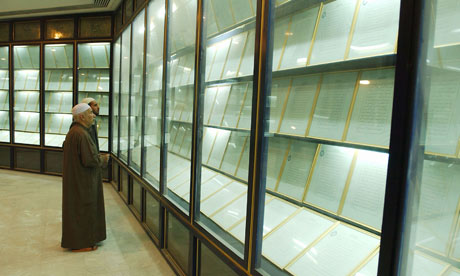 It was etched in the blood of a dictator in a ghoulish bid for piety. Over the course of two painstaking years in the late 1990s, Saddam Husseinhad sat regularly with a nurse and an Islamic calligrapher; the former drawing 27 litres of his blood and the latter using it as a macabre ink to transcribe a Qur'an. But since the fall of Baghdad, almost eight years ago, it has stayed largely out of sight - locked away behind three vaulted doors. It is the one part of the ousted tyrant's legacy that Iraq has simply not known what to do with.

The vault in the vast mosque in Baghdad has remained locked for the past three years, keeping the 114 chapters of the Muslim holy book out of sight - and mind - while those who run Iraq have painstakingly processed the other cultural remnants of 30 years of Saddam and the Ba'ath party.

"What is in here is priceless, worth absolutely millions of dollars," said Sheikh Ahmed al-Samarrai, head of Iraq's Sunni Endowment fund, standing near the towering minarets of the west Baghdad mosque that Saddam named "the Mother of All Battles". Behind him is the infamous Blood Qur'an, written in Saddam's own blood.

Even to get to this point - the last step before entering the forbidden vault - has been a tortuous process.

On one flank had been the government, doing all it could to prevent access. The Shia-led regime is highly sensitive to the re-emergence of any symbols that might lionise the remnants of the Ba'athist rank and file, which still orchestrates bombings and assassinations every few days.

And then there are the Sunnis themselves, who are fearful of government retribution if they open the doors and of divine disapproval if they treat this particularly gruesome volume of the Qur'an with the reverence of a holy book.

"It was wrong to do what he did, to write it in blood," says Sheikh Samarrai. "It is haraam [forbidden]."

Despite this, Sammarie says he acted as the document's protector during the mayhem that followed the US-led invasion in 2003, hiding pages in his house and moving others among the homes of his relatives.

"I knew this would be much sought after and we made the decision to protect it. But to see this now is not easy. There are three keys and none of them are held in the one place. I have one, the police chief in the area has another and there is a third in another part of Baghdad. There has to be a decision of a committee to let you in."

Other relics have been much easier for the government to deal with, such as the Saddam statue that was toppled by US marines in April 2003, and copper busts of Ba'athist leaders that were erected all over the country. Their removal was straightforward, like lancing boils, say the men who run the country now.

As Iraq slowly assembles its fourth government since the fall of Baghdad in 2003, attention is now turning to the more difficult issues - what to do with the landmarks and relics that are unique to the Saddam regime but which have also become synonymous with Iraq. Some, like the crossed swords that bookend Saddam's former military parade ground in central Baghdad, are as identifiable to the capital as the Hagia Sophia Mosque is to Istanbul, or the Old City to Damascus.

Several prominent politicians, such as Ahmed Chalabi, one of the key opposition figures to Saddam, are adamant that anything connected to the executed dictator must go.

"The best talent in Iraq was ordered to produce monuments which are designed to suppress the people," says Chalabi, who headed the National Deba'athification Commission in the early years after Saddam's removal. "This is very destructive for the psyche of the Iraqi population. This is a clear reminder of the consequences of totalitarianism and idealising a person that embodies evil. They have brought nothing to Iraq. They are not worth celebrating. They have nothing aesthetic to offer. I am for removing them."

Other men who also played a key role, first in Saddam's removal, then his trial and execution, are more sanguine.

"He was there and he ruled and he impacted on the world," said Mowaffak al-Rubaie, the former national security adviser who escorted Saddam to the gallows. "But he was a part of our history. He was a bad part of our history, but he made a huge difference, whether we like it or not. We need not bury the legacy of that period. We need to remember it, all what is bad and what is good and learn lessons. And the most important lesson is that dictatorship should not return to Iraq."

In 2005, the government formed a committee to oversee the removal of symbols linked to Saddam.

Ali al-Moussawi, a spokesman for the prime minister, Nour al-Maliki, underscored the dilemna. "Not everything built during this regime we should remove," he said from his office, which overlooks the crossed swords. "There were some sculptures however that were solely about dictatorship and control over Iraq. Some spoke to dictators and battles and they should be removed. They have ethnic and sectarian meanings.

"The statues of Saddam have no place on the streets. It is not his privilege to keep them there. If they remain in the community they will provoke the people."

But Moussawi was more open to compromise over the Blood Qur'an: "We should keep this as a document for the brutality of Saddam, because he should not have done this.

"It says a lot about him. It should never be put in a museum though, because no Iraqi wants to see it. Maybe in the future it could be sent to a private museum, like memorabilia from the Hitler and Stalin regimes."

In time, the legacy of Saddam Hussein and his 30 years of brutality is likely to become part of a more detached debate in Iraq's national consciousness, much like the discussions that took place in Germany in the late 1940s after the ousting of the Nazis.

For now, though, the soul searching is being left to those who made the disputed works, and those entrusted as their temporary caretakers.

Abbas Shakir Joody al-Baghdadi was the calligrapher commissioned to work on the Qur'an. He sat with Saddam for two years after receiving a phone call from the tyrant himself.

Saddam, at that point, had decided to re-embrace with his religion after his elder son, Uday, had survived an assassination attempt.

The result of Baghdadi's work was an exquisitely crafted book that would take its place in any art exhibition - if it wasn't for the fact that it was written in blood.

"I don't like to talk about this now," says Baghdadi, speaking by telephone from the US state of Virginia, where he now lives. "It was painful part of my life that I want to forget about."

Back at the mosque, Sheikh Samarrai is nervous. He fears the wrath that will descend on him - from the government definitely, and possibly from a much higher power - if he swings open the final door.

"Even if I let you in, you would need to stand 10 feet away from the pages and they are all behind glass cases," he said. Then he makes his decision. "It is just not worth it for anyone. They will stir up too much trouble."

Some things in Iraq will take many more years to confront.

Built in the mid-80s as a symbol of victory in the war with Iran, even though the war still had two years to run and ended in a stalemate. They bookend what is now the Green Zone.

There are at least 300 scattered all over the country. Some have been taken over by government ministries, others remain derelict. Yet more are looming eyesores, especially in Saddam's hometown of Tikrit, where up to five could eventually be destroyed.

On the eastern side of one of Baghdad's main bridges – an archway built by a famous architect, Jawad Salem, to commemorate the ousting of Iraq's royal family in 1959. It became synonymous with Saddam and the Ba'athists.

Dozens once peppered the country, but the large green version in al-Firdous Square came to signify the end of Saddam when torn down by US marines in April 2003. The bust, right, is kept in the office of former national security adviser Mowafak al-Rubaie who led Saddam to the gallows.

posted a new blog entry Elevating the Self: A Book on Values.
30 months ago