Back to main page
Are libraries finished? Five arguments for and against

With more than 400 public libraries under threat of closure, the campaign to save them is gathering pace. But in an age of downloads, cheap books and easy online shopping, can this great British institution survive?

Some of the UK's best-selling authors have joined the fight against "cultural vandalism" by backing a national day of protest read-ins against library closures on Saturday.

But no matter how eloquently Poet Laureate Carol Ann Duffy or author Colin Dexter extol their virtues, the fact is library visitor numbers - like their budgets - are falling.

Campaigners say they are irreplaceable doors to learning more relevant now than ever before, but for others the speed and breadth of the web has rendered them obsolete dinosaurs.

So what can the internet provide that a library can't, and when is there simply no online substitute for a trip to your local library? Here are five examples on either side:

Only at a library

1. Specialist research As tempting as it is to view the web as a tool for gathering all information, there are gaps only library documents, books and maps can fill.

Local and family historians as well as academic and historical researchers are among those who still rely heavily on paper and print.

Historian and author Andrew Dalby, 63, who edits pages for online encyclopaedia Wikipedia from his home in France, says he still needs regularly visits to good libraries in England.

"Those libraries that have managed to retain older collections need to go on retaining them... we need that evidence of ingenuity, originality and inspiration that we can lose if we only look at things produced in the last few years."

2. Environment to learn Sometimes there's no substitute for human contact. Mr Dalby says just being in a place surrounded by books and information with help at hand to access them is invaluable.

Whilst some will crave the refuge of silence libraries offer, others such as the vulnerable and isolated have a place to interact, learn and meet people.

Librarian and campaigner Lauren Smith, 23, says some lonely people would be even more isolated by being left on their own in a room trying to use the internet.

3. Expert staff Anyone who's spent five minutes trawling the thousands of medical and health websites will know the perils of misinformation.

Librarians have specialist knowledge and are trained to find reliable information and evaluate it - a skill as relevant in the digital age as it has always been.

Mr Dalby says simple Google searches are hit and miss, throwing up websites edited to varying degrees of academic rigour and professionalism. Librarians can help navigate through the "labyrinth" of information and around these pitfalls, he says.

4. Free internet access With 30% of the population still without a home internet connection, libraries are for many their first and last online experience.

Although some charge after a certain period, all libraries should offer at least some free online access.

Ms Smith says libraries reduce the "digital divide" by offering free access to those who can't afford a pc or monthly subscriptions.

5. Engage in local democracy Community forums in libraries are the perfect place to meet and engage in local politics because they're neutral, non-judgemental spaces, Ms Smith says.

"The problem with the internet is people flock together and have similar views, there's no real dialogue between people who have different views," she says.

"Libraries do so much more than just give information, there are community discussion groups... and reading groups where you can talk about green initiatives or economic issues."

1. Searchability The speed of research and interactivity of the internet make it an altogether richer experience than traditional libraries.

Mr Dalby says: "You can get lost in the world of information on the internet but we gain and lose.

"We tend not to read things all the way through anymore. You find a link, follow it and never go back to what you were originally reading, which is perhaps bad for the attention span.

"On the other hand, it's serendipity. It's wonderful that you can leap on from one source of information to another, froBy Peter Jackson

BBC Newsm one question to another series of questions, it is a wonderful resource." 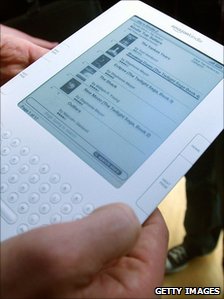 E-readers like the Kindle take the weight off book lovers

2. Digital books Forget catching a bus to the library to carry home a limited number, yet heavy stack nonetheless, of books.

For those who can afford a portable reader like a Kindle or iPad, the convenience of accessing books on a beach, up a mountain, or anywhere else for that matter, can be irresistible.

But with sales of e-books fast catching up paperbacks, the full impact on traditional publishers has yet to be revealed.

3. Comfort in numbers OK, forums and social networks can be an impersonal way to interact, but sometimes magic happens. Mr Dalby explains: "Sometimes the right answer just comes when people ask each other questions on forums.

"One adds one bit of information, another something else, and that information could be questioned by a third or fourth person.

4. Brings niches together If you had a niche interest in something, it wasn't always easy to find someone with the same niche interest, now it really is, says Mr Belam.

"If you were, say, a Leeds United fan in Croydon, you used to have to join a club or put leaflets in your local library, then hope you find people in common.

"Community activity used to revolve around notice boards in town halls and libraries, now your notice board is global."

5. Self-publishing Mr Belam says the traditional barriers to publishing have been shifted by the advent of do-it-yourself e-books on the internet.

Whereas information in libraries has been limited to the books on its shelves - the information which managed to get published, sites like Blurb allow you to print on demand, he says.

Various sites allow you to download software which will format your manuscripts.

"You used to only be able to publish news by owning the printed presses, and you needed a publisher to agree to publish your book, now you can publish books on demand," he says.

posted a new blog entry Elevating the Self: A Book on Values.
31 months ago