SOME SOCIAL REFORMERS OF INDIA

ABOUT THE PROJECT: This is a project on Social Reformers of India. In this project i would like to highlight some of the social reformers of india who have worked hard to reform our country India.

INTRODUCTION:Indian history has seen some extraordinary reformers who not only established the very foundation of modern India but also made an impact on the world with their philosophy and great work for the society.A reform movement is a kind of social movement that aims to make gradual change, or change in certain aspects of society rather than rapid or fundamental changes.The word social reformers itself says that reform india into a developing country, i.e, make india into a developing country. A reform movement is distinguished from more radical social movements such as revolutionary movements. Decades come and go but what remain are the impression and great acts of the social reformers. Reformists' ideas are often grounded in liberalism, although they may be rooted in Utopian, socialist or religious concepts. Some rely on personal transformation; others rely on small collectives, such as Mahatma Gandhi's spinning wheel and the self sustaining village economy, as a mode of social change.India is privileged to have number of great souls like Dayanand Saraswati and Raja Ram Mohan Roy. They managed to bring revolutions by making radical changes in the society. Some of the reformers took up the challenges of breaking the jinx of prevailing caste-system while some fought for the introduction of girls'-education and widow remarriage. 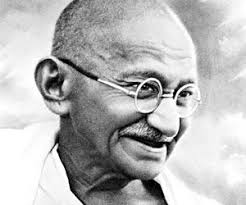 Mahatma Gandhi(2 October 1869 – 30 January 1948) (Father of the Nation) was the pre-eminent political and spiritual leader of India during the Indian independence movement. He was the pioneer of satyagraha—resistance to tyranny through mass civil disobedience, firmly founded upon ahimsa or total nonviolence—which led India to independence and inspired movements for civil rights and freedom across the world. Gandhi led nationwide campaigns to ease poverty, expand women's rights, build religious and ethnic amity, end untouchability, and increase economic self-reliance. Above all, he aimed to achieve Swaraj or the independence of India from foreign domination.

Virachand Raghav Gandhi (1864–1901) was from Mahuva . He is 19th Century Indian patriot who was friend of Mahatma Gandhi and contemporary to Swami Vivekanand. He and swami vivekananda drew equal attention at the first World Parliament of Religions in Chicago in 1893 . He won a silver medal in same . His statue still stands at the Jain temple in Chicago. He was key member of Indian National Congress . And as a reformer established a] Gandhi Philosophical Society, b] Society for the Education of Women in India (SEWI). Under the banner of SEWI, several Indian women came to U.S.A. for higher studies. c] School of Oriental Philosophy, d] Jain Literature Society in London. . And he delivered 535 lectures in USA and europe. He also died at young age of 37 alike Swami Vivekanand. Today Govt. of India has recognised his service by issuing Postal Stamp in his memory. 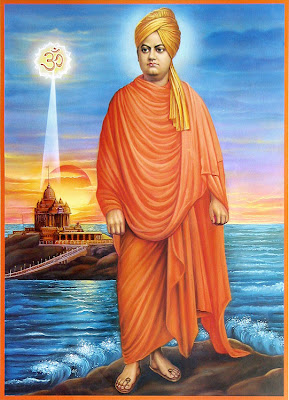 (January 12, 1863–July 4, 1902) He was the founder of Ramakrishna Mission. Vivekananda is considered to be a major force in the revival of Hinduism in modern India. He is considered a key figure in the introduction of Vedanta and Yoga in Europe and America. He introduced Hinduism at the Parliament of the World's Religions at Chicago in 1893. 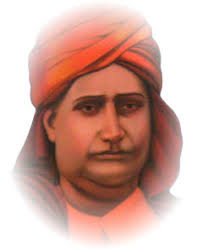 (February 12, 1824 – October 31, 1883) was an important Hindu religious scholar and the founder of the Arya Samaj, "Society of Nobles", a Hindu reform movement, founded in 1875.He was the first man who gave the call for Swarajay in 1876 which was later furthered by Lokmanya Tilak.

Raja Rammohun Roy(August 14, 1774 – September 27, 1833) was a founder of the Brahma Sabha in 1828 which engendered the Brahmo Samaj, an influential Indian socio-religious reform movement. He is best known for his efforts to abolish the practice of sati, the Hindu funeral practice in which the widow was compelled to sacrifice herself on her husband’s funeral pyre. It was he who first introduced the word "Hinduism" into the English language in 1816. For his diverse contributions to society, Raja Ram Mohan Roy is regarded as one of the most important figures in the Indian Renaissance. Ram Mohun Roy's impact on modern Indian history was a revival of the pure and ethical principles of the Vedanta school of philosophy as found in the Upanishads. 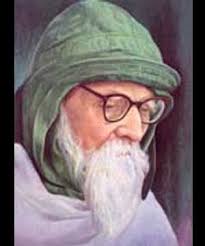 Vinoba Bhave(September 11, 1895 - November 15 1982) was an Indian advocate of Nonviolence and human rights. He is considered as the spiritual successor of Mahatma Gandhi. Vinoba Bhave was a scholar, thinker, writer who produced numerous books, translator who made Sanskrit texts accessible to common man, orator, linguist who had excellent command of several languages (Marathi, Hindi, Urdu, English, Sanskrit), and a social reformer. He wrote brief introductions to, and criticisms of, several religious and philosophical works like the Bhagavad Gita,works of Adi Shankaracharya, the Bible and Quran. His criticism of Dnyaneshwar's poetry as also the output by other Marathi saints is quite brilliant and a testimony to the breadth of his intellect. A university named after him Vinoba Bhave University is still there in the state of Jharkhand spreading knowledge even after his death. 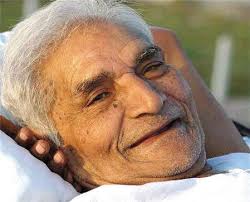 He(December 26, 1914 – February 9, 2008) was an Indian social worker and social activist known particularly for his work for the rehabilitation and empowerment of poor people suffering from leprosy. He spent some time at Sevagram ashram of Mahatma Gandhi, and became a follower of Gandhism for the rest of his life. He believed in Gandhi's concept of a self-sufficient village industry that empowers seemingly helpless people, and successfully brought his ideas into practice at Anandwan. He practiced various aspects of Gandhism, including yarn spinning using a charkha and wearing khadi. Amte founded three ashrams for treatment and rehabilitation of leprosy patients, disabled people, and people from marginalized sections of the society in Maharashtra, India. 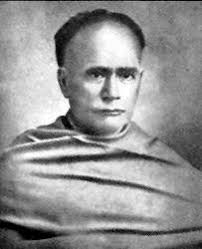 He(1820-1891) was a philosopher, academic, educator, writer, translator, printer, publisher, entrepreneur, reformer, and philanthropist. His efforts to simplify and modernize Bangla prose were significant. He was a Bengali polymath and a key figure of the Bengal Renaissance. Vidyasagar championed the uplift of the status of women in India, particularly in his native Bengal. Unlike some other reformers who sought to set up alternative societies or systems, he sought, however, to transform orthodox Hindu society from within. Vidyasagar introduced the practice of widow remarriages to mainstream Hindu society. In earlier times, remarriages of widows would occur sporadically only among progressive members of the Brahmo Samāj. 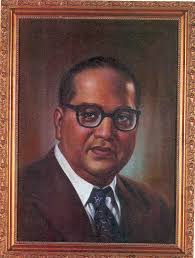 He(14 April 1891 — 6 December 1956) was an Indian jurist, political leader, Buddhist activist, philosopher, thinker, anthropologist, historian, orator, prolific writer, economist, scholar, editor, revolutionary and the revivalist of Buddhism in India. He was also the chief architect of the Indian Constitution. Ambedkar spent his whole life fighting against social discrimination, the system of Chaturvarna — the Hindu categorization of human society into four varnas — and the Hindu caste system. He is also credited with having sparked the bloodless revolution with his most remarkable and innovative Buddhist movement. Ambedkar has been honoured with the Bharat Ratna, India's highest civilian award. 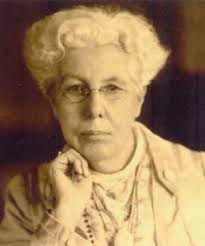 She(October 1 , 1847 – September 20, 1933) was a prominent Theosophist, women's rights activist, writer and orator and supporter of Irish and Indian self rule. In 1908 Annie Besant became President of the Theosophical Society and began to steer the society away from Buddhism and towards Hinduism. She also became involved in politics in India, joining the Indian National Congress. When war broke out in Europe in 1914 she helped launch the Home Rule League to campaign for democracy in India and dominion status within the Empire which culminated in her election as president of the India National Congress in late 1917. After the war she continued to campaign for Indian independence until her death in 1933. 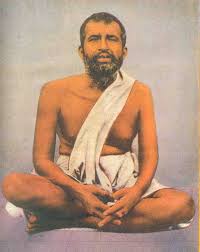 Ramakrishna Paramhansa was one of the foremost Hindu spiritual leaders of the country. His teachings are still deeply revered by the people. He also played a key role in the social reform movement in Bengal in 19th century. 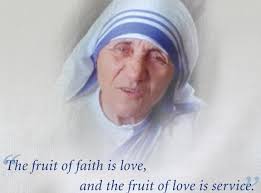 Mother Teresa was a true follower of humanity. Many people considered Mother as the "reincarnated form of Lord Jesus". Mother Teresa devoted her entire life in serving the needy and abandoned people of the society.  Although her mission started in India, she succeeded in bringing the people of all societies under one roof, i.e. humanity. 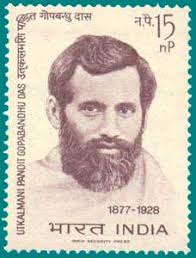 Gopabandhu Dash (1877–1928) known as Utkal Mani(Gems of Odisha) was a defining social worker who excelled in the field of politics as well as literature. Gopabandhu was a legend in the Indian culture. He served his people even at the cost of his family.During his study period, he started Kartavya Bodhini Samiti (Duty Awakening Society) to encourage his friends to do their duty as citizens and take on social, economic and political problems. He was leading a team to aid flood victims, when he heard of his son's serious illness but remained to serve the locals rather than return home to his son. he became the founder president of Congress in Odisha.

8 years ago Delete
I APPRETIATE ME