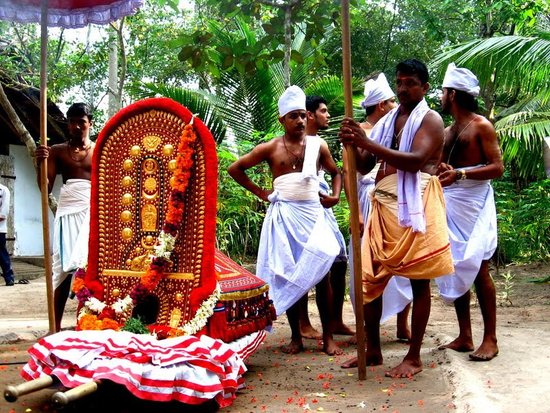 The earliest people of Kerala were believed to be Megalith builders aged between 10th Century BC and 5th Century AD. Their language was most probably was an archaic form of Tamil. They built burial moments similar to megalithic monuments in West Asia and Europe including Menhirs, Rock cut chambers, dolmens with port hole cists, stone circles and specifically hat stones (Toppikallus), which were peculiar to Kerala.

Jainism was brought to Kerala during the period of Chandra Guptha mourya. The evidence of their presence in Kerala is the fact that some Hindu temples of today were originally Jain temples, the deites of some of the hindu temples like Kudalmanikkam Temple near Irinjalakuda is believed to be Jain saints originally.

During the period of Asoka, Bhudhists came to Kerala and established their temples and monasteries in different parts of the country. The following Hindu temples are believed to be once Buddhist shrines: the Vadakkunnathan Temple of Trichur, the Kurumba Bhagavathi Temple of Cranganore, and the Durga Temple at Paruvasseri near Trichur. A large number of Buddha-images have been discovered in the coastal districts of Alleppey and Quilon; the most important Buddha-image is the famous Karumati Kuttan near Ambalappuzha.

The first lighted period in Kerala History in called the Sangam Age (1-500 AD.) Collections of poems like Purananuru, Akananuru, Silappathikaram and Manimekhalai by poets like Paramer, Kapilar, Gautamanar, mamulanar and poetess Avvaiyar. The Sangam poems were secular. The poems give us information about the Chera kulas like Utiyam, Neducheralathan and Chenkuttawan. Their capital was vanchi (muziris), which was an important trading centre with Rome. There were harbours of Naura near Kannur, Tyndis near Quilandy, and Bacare near Alappuzha which were also trading with Rome and Palakkad pass (churam) facilitated migration and trade. The contact with Romans might have given rise to small colonies of Jews and Syrian Christians in the chief harbour towns of Kerala. The Jews of Kochi believe that their ancestors came to the west coast of India as refugees following the destruction of Jerusalem in the first century AD The Syrian Christians claim to be the descendants of the converts of St. Thomas, one of the Apostle of Jesus Christ. The tribal society was slowly moveing towards civilization.

A silent revolution was taking place in the social system of Kerala during the last
phase of Samgam Age. Brahmins from the Karnataka region started coming to Kerala. By about the 8th century, a chain of thirty-two Brahmin settlements had come up, which eventually paved the way for the social, cultural and political separation of Kerala from the Tamil country, in due course. A large number of the settlements were in Central Kerala. The process of Brahminisation or Sanskritisation began. Temples were constructed, Nambudiri community was evolved. Sankara the exponent of Advaita (monistic) philosophy lived in the 8thC.AD. The whole of Kerala came to be covered by a network of temple centered Brahmin settlements. Under their control, these settlements had a large extend of land, number of tenants and the entailing privileges. With more advanced techniques of cultivation, sociopolitical organization and a strong sense of solidarity, the Brahmins gradually formed the elite of the society. They succeeded in raising a feudal fighting class and ordered the caste system with numerous graduations of upper, intermediate and lower classes. In due course, the consolidation of these settlements and the establishments of their ascendancy gradually led to the evolution of a new Malayalee language and a new Malayalee culture, the separate identity of Kerala was in the making.

A new dynasty called Perumal of Mahodayapuram emerged in Kerala in the 9th Century AD. The capital city of mahodaya puram was built around the temple of Tiruvanchi kulam. A major part of Kerala was brought under the control of this dynasty. Perumal was the overlord (Keraladhinatha) of Kerala. Perumal had a Nair force under him.There were rulers like Sthanu Ravivarma, Bhaskara Ravivarman and RamavarmaKulasekhara. A network of landed aristocracy was evolved in Kerala. A peculiar type of feudal relationship was evolved. Each Nadu or District had its own hereditary or nominated governor called the Naduvazhi.

Kollam,the capital of Venadu was an important harbour. In 825 AD Kollam era (Malayalam Era) came into existance. Matrilineal (Marumakkathayam) system was developed. Trade and commerce flourished. Hill products were exported to West Asia. Caste system began to develop. Sections like Panas, Pulayas, and Parayar were deprived of all privileges.

Importance was given to Sanskrit language and many Sanskrit works were written in this period Tapathi Samvaranam and Subhadra Dhamanjayam are among them. Sankara Narayana was a famous astronomer. There was progress in temple architecture-and sculpture.

Of the many Nadus, three - Venad, Kozhikode and Kolathumody - became prominent. Venad in the south with the new capital, Thiruvananthapuram grew. Samuthiris with the new capital Kozhikkode was another major kingdom. Arab contacts of Kerala are also very ancient and it is believed that Islam came to Kerala as far back as the 9th century AD. Arab and native Muslims seemed to have played an important in the development of Samuthiri kingdom. Though smaller in size other two important kingdoms were Kochi in the middle and Kolothunadu in the North. In general, Jews, Christians and Arab Muslims played an important part in the development of trade and towns.

The period from the 12thC to the beginning of 19thC is generally classified as the Middle Age in Kerala History. At the beginning of the 12th century, the cholas and pandyas attacked Kerala combined and the Chera Kingdom lost its central power. Kerala became a land of agricultural villages and each of them became under a Naduvazhi. Wars among Naduvazhis became common. Society transformed into a feudal one with a graded hierarchy, hereditary occupations and well-defined duties and responsibilities for each class of people. A new social system iof this age is the matrilineal form of inheritance. In spite of the predominantly agrarian character of society, trade and commerce flourished. Hill products from the Western Ghats carried down, by the many rivers, to the natural harbours on the Arabian Sea secured an expanding market in West Asia and Europe.

The arrival of Vasco - da gama in 1498 marked the beginning of a new era in Kerala History. This new era called Gama epoch he rated the age of colonization. The Portuguese wanted monopoly in spice trade, especially in pepper. The Portuguese demanded the expulsion of all Muslim traders. This resulted in war between the Portuguese and Samuthiris. Samuthiris naval force under the Kunjali Marakkar fought bravely against the Portuguese. The Dutch and French intervention in Kerala placed the Portuguese at disadvantage and by 1663 the Portuguese were diminished from Malabar Coast. The Dutch were prominent but later gave way to British supremacy. In 1682 the English settled Talassery and in 1694 at Anhuthengu. From these settlements they extended their influence all over Kerala. The Kingdom of Mysore led by Tippu Sulthan tried to invade Malabar but was defeated by the combined force of British and the local Kingdom. By the Treaty of Sriranga pattanam (8th March 1792) Malabar practically came under the British. The British signed treaties with rulers of Thirvithamkur and Kochi. These rulers accepted the supremacy of the British. All the early rebellions like that of Pazhassi Raja, Veluthampi, Paliath Achan and Kurichiyas against the British were crushed. All the Naduvazhies were brought under the control of the British.

The British rule in Malabar and British supremacy in Thiruvithamkur and Kochi resulted in far reaching changes in the life of Malayalis. Western education, Modern Judiciary, rule of law, new tenancy rules etc were introduced. Cash economy prevailed. The traditional society was shaken. Several vestiges of feudalism disappeared. Marthanda varma of Travancore and Sakthan Thampuran of Cochin crushed feudal aristocracy of Nairs. Kerala was on the whole undergoing a steady and gradual transformation in the 19th C. This century also witnessed the emergence of socio-religious reform movements. Sri Narayana guru, Chattampi Swamikal, Ayyankali, Vakkam Abdul Khader Moulavi, Vagbhatananda and others accelerated social reforms. Narayan Guru was the prior who campaigned against caste system, Brahmin supremacy and many social disabilities. This Renaissance in Kerala further gained momentum in the early decades of the 20th century. In this period rationalism and new trends in malayalam literature influenced the mind of the Malayalis.

Towards the close of the 19th C National movement was spreading in India. Many prominent persons worked for Indian National Congress from Kerala. G.P. Pillai, Sir. C. Sankaran Nair and Rairu Nambiar deserve mention. C. Sankaran Nair of Ottapalam was the first Malayali who president over the congress sessions. He was the president of the Amaravathi Session of the Congress in 1897. By 1919 Congress activities gained momentum in Malabar. Gandhiji's influence was increasing. Non co-operation and Khilafat movement and Salt Satyagraha fired up the national spirit in Malabar. Some of the early leaders were K. Kelappan, Muhamed Abdurahiman, K.P. Kesava Menon, and K. Madhavan Nair

Vaikkam Satyagraha, Guruvayoor Satyagraha and the ceremonial breach of the salt law strengthened the freedom movement in all parts of Kerala. In Thiruvinthamkur the nature of freedom movement was different. Their caste organizations played an important role in bringing out changes. These organizations agitated for social justice and adequate representation for backward classes in government jobs and in legislature. Slowly political organizations like the Travancore State Congress were founded. Some of the prominent leaders were TK Madhavan, C Kesavan, TM Varghese and Pattam Thanupilla. In Cochin, Prajamandalam was formed. Some important leaders were Ikkanda Warrier and Panampilly Govinda Menon.

Peasants and workers also formed their organizations. They agitated for reforms.
By 1930s a strong leftist movement emerged in Kerala. Socialism and Communism influenced many leaders and the Kerala Provincial Congress Committee was dominated by leftists were under the leadership of EM.S. Nambuthiripad and P.S. Krishnapillai. When the world war broke out the rift between the Right and the left widened.

This resulted in the formation of the Communist Party of India in Kerala in 1939. The Quit India movement in 1942 had its impact in Kerala. There was great enthusiasm among students in Malabar. In Travancore the Communist launched a violent struggle against the constitutional scheme proposed by the Diwan C.P. Ramaswamy Iyer. The Punnapra Vayalar out break in A!apuzha under the leadership of the communists was part of this patriotic struggle.

When in 1947 India became free Malabar, Kochi and Travancore also became free and became part of the India Union. The Aikya Kerala Movement under the leadership of K.P. Kesava Menon and K. Kelappan demanded and worked for the linguistic state of Kerala. The same spirit is found in the book" Keralam Malayalikalude Mathrubhumi" written by EM.S. Nambudiripad. This dream of Aikya Kerala materialized with the reorganization of States on a linguistic basis in the light of the report of the States Reorganization Commission. It was decided to add Malabar district and the Kasargod taluk of south Canara district to Travancore-Kochi and to separate the Tamil-speaking southern region of old Travancore from Travancore-Kochi for inclusion in Madras State. On November 1, 1956, the new State of Kerala was formally inaugurated.