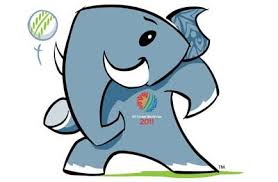 The 2011 ICC Cricket World Cup was the tenth Cricket World Cup. It was played in India, Sri Lanka, and Bangladesh. It was Bangladesh's first time co-hosting a World Cup. The World Cup was also due to be co-hosted by Pakistan, but in the wake of the 2009 attack on the Sri Lanka national cricket team in Lahore, the International Cricket Council (ICC) decided to remove Pakistan from the hosting countries.[1] The headquarters of the organising committee were originally situated in Lahore, but have now been shifted to Mumbai.[2] Pakistan was supposed to hold 14 matches, including one semi-final.[3] Eight of Pakistan's matches (including the semi-final) were awarded to India, four to Sri Lanka and two to Bangladesh.[4]

All matches in the World Cup were accorded One Day International status, with all matches being played over 50 overs. Fourteen national cricket teams competed in the tournament, including ten full members and four associate members.[5] The World Cup took place between 19 February and 2 April 2011, with the first match played on 19 February 2011 with co-hosts India and Bangladesh facing off at the Sher-e-Bangla National Stadium in Mirpur, Dhaka.[6] The opening ceremony was held on 17 February 2011 at Bangabandhu National Stadium, Dhaka, two days before the start of the tournament,[7] with the final on 2 April 2011 between India and Sri Lanka at Wankhede Stadium, Mumbai.

India won the tournament defeating Sri Lanka by 6 wickets in the final. India became the first nation to win a World Cup final on home soil.[8] India's Yuvraj Singh was declared the man of the tournament.

As per ICC regulations, all 10 full members automatically qualify for the World Cup, including Zimbabwe who have given up their Test playing status until the standard of their team improves.[15]

The ICC also organised a qualifying tournament in South Africa to determine which Associate teams would participate in 2011 event. Ireland, who had been the best performing Associate nation since the last World Cup, won the tournament, beating Canada in the final. The Netherlands and Kenya also qualified by virtue of finishing third and fourth respectively.[16]

The following 14 teams qualified for the final tournament.

India defeated defending champions Australia in the quarter-finals and Pakistan in the semi-finals to reach the final, while Sri Lanka defeatedEngland and then New Zealand to make it to the final.

Both of India's knockout matches were high-pressure contests. Australia was a strong team and defending champion, and India had to give a very good performance to restrict Australia to 260 and then successfully chase down the target even as wickets fell regularly. Pakistan and India have historically been rivals, and there was immense public pressure on both teams. The match was attended by the Prime Ministers of both India and Pakistan. India batted first and ultimately defeated Pakistan by 29 runs.

Sri Lanka had clinically demolished England in the quarter final, defeating them by 10 wickets. Both the Sri Lankan openers, Tillakaratne Dilshan and Upul Tharanga made unbeaten centuries and put up a world-record stand for the first wicket in a World Cup. The New Zealand semi-final was more keenly contested, but was still won with relative ease by Sri Lanka. The matches showcased the effective unconventional bowling of pace spearhead Lasith Malinga, restrictive fielding, and the batting prowess of the Sri Lankan top order.

The final generated huge interest. It was the first time both World Cup finalists were Asian teams. The President of Sri Lanka Mahinda Rajapaksa, a known cricket enthusiast, announced he would attend the match along with his sons. Following this, the Indian PresidentPratibha Patil also announced her decision to attend the match.